It was show time! Twenty-one year old Joseph Cunningham, a longtime Hoofbeats rider, stood behind the curtains, trembling with excitement, ready to play his part as Prince Charming in the Baroque mounted musical. In the show ring, he could see the professional actress playing Snow White floating around the “stage,” mounted on her prancing white steed. The music swelled. That was his cue! Go! Drawing his plastic sword and pushing his bejeweled costume crown straight over his wavy brown hair, he danced into the ring and played his part with gusto and calm collected cool.

Joseph in his Prince Charming costume for the Baroque mounted musical

Joseph’s winning personality makes him ideal to take center stage. “Some of my proudest moments at Hoofbeats were when they asked me to be in the play. I was like ‘Wow! They really want me to do this!” he exclaimed.

The Baroque equestrian musical, which is essentially costumed theater on horseback, is a signature event of an annual weekend-long show held at the Virginia Horse Center. Since the event raises money for Hoofbeats, the therapeutic riders often play an active role alongside professional performers.

Opportunities like these are highlights of Joseph’s eight years of riding at Hoofbeats. “It’s absolutely the perfect sport for Joseph,” explained his mom, Lessley Cunningham. “There’s a lot of down time for hanging out with people. Then when it’s time to go, there are short bursts of focus. It’s the perfect sport for him.”

Joseph has Williams syndrome, a rare neurological disorder with unique challenges and extraordinary gifts. “Being a syndrome, it’s a spectrum,” explained Lessley. “It manifests physically, developmentally, emotionally, mentally… the whole gammit. And luckily Joseph is on the very mild end of the spectrum physically. Most of his difficulties have had to do with behavior.”

People with Williams are characterized by extremely social, animated, lovable personalities. “To them, there’s no such thing as strangers,” explained Lessley. “The concept of stranger danger is not something that they understand, and frankly that scares me. He doesn’t know how to tell the good guys from the bad guys. He’s just a joy to be around. So most of the time that’s wonderful, but the need for supervision will always be there.

“Underneath the Williams, he’s a really smart kid and every now and again you can just see it shining through. He is very self-aware. He is very high functioning. And so it’s frustrating for him at times because he is so self-aware. It’s hard for him – when people treat him differently.” 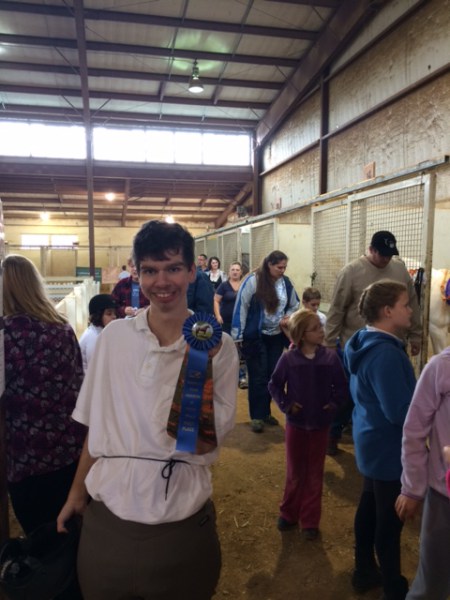 Winning blue at the Therapeutic Riding Association of Virginia Show

Joseph was introduced to Hoofbeats through the Virginia Special Olympics program, which partnered with the center to provide an equestrian division for the annual games. The first time Joseph climbed onto a horse’s back, he looked down at his mom and shouted, “Hello down there!” Lessley shouted back, “Hello up there!”

Since then, Hoofbeats has been an integral part of their lives. “We have found a home away from home at Hoofbeats. It will be a part of our lives forever,” said Lessley.

Personal goal setting and the element of competition have also been a transformative piece of Joseph’s time riding. “When I get into the ring, when there’s a test I have to do, I am in my zone,” he explained. “I am always hoping that I do the best that I can – and hoping that I win first place in everything! I’m really competitive. One of the major things I have also overcome is a fear of heights. The first time I rode a horse, I was scared out of my mind. There are some times that I am still a bit scared, but they help me overcome it and it’s just a good place to be.”

As he continues working on conquering a fear of heights, he already has his eyes set on a new goal. “One of the things I haven’t overcome yet and am hoping that I will be able to is trotting by myself,” he said. “I think that would be my next goal.”

Joseph enjoys the thrill and competition of riding, but he also enjoys the personal relationships with the horses. “I’ve always been fascinated with horses and just the way they always talk to me and understand me. And they help me. They help me through stuff that sometimes are very personal.”

Another one of his favorite features of Hoofbeats is musical dinner theater – a perfect outlet for his glittering personality. In the summer session, Hoofbeats hosts a relaxed afternoon horse show in which riders perform all their dressage drills to music of their choice. After the show, they roll tables out into the barn and all the riders, family members, friends, and staff enjoy a huge potluck dinner together.

“People with Williams have very good musical hearing. I just love riding to all different kinds of music that they do provide for us. And it’s just interesting, it’s fun, it’s silly. It’s just really, really fun,” Joseph said.

“Hoofbeats is one of those special places on earth. It’s hard to put it into words. It’s the people, the feeling the atmosphere the horses. It’s just a fantastic combination.”

This website uses cookies to improve your experience while you navigate through the website. Out of these cookies, the cookies that are categorized as necessary are stored on your browser as they are essential for the working of basic functionalities of the website. We also use third-party cookies that help us analyze and understand how you use this website. These cookies will be stored in your browser only with your consent. You also have the option to opt-out of these cookies. But opting out of some of these cookies may have an effect on your browsing experience.
Necessary Always Enabled
Necessary cookies are absolutely essential for the website to function properly. This category only includes cookies that ensures basic functionalities and security features of the website. These cookies do not store any personal information.
Non-necessary
Any cookies that may not be particularly necessary for the website to function and is used specifically to collect user personal data via analytics, ads, other embedded contents are termed as non-necessary cookies. It is mandatory to procure user consent prior to running these cookies on your website.
SAVE & ACCEPT